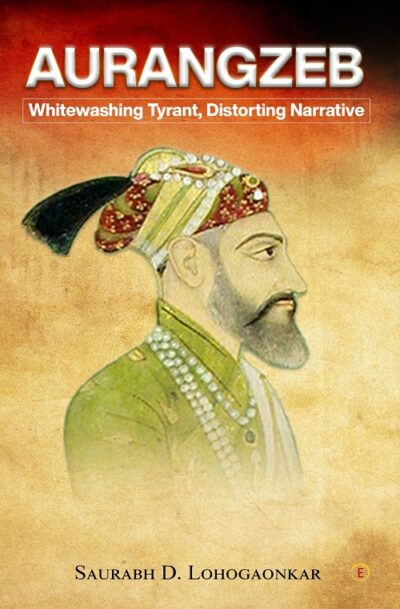 “They that the truth is always harsh however this same truth becomes painful too for the ones who are made to believe in the lies and for those who considers the lies to be their truth. The false and made-up stories, which are presented as truth often leads to some major clashes when the real truth comes out!”

Reviewing this daring historic title, “Aurangzeb – Whitewashing Tyrant, Distorting Narrative” by Author Saurabh D. Lohogaonkar has been a great learning experience to me. Since, almost each one of us have read about the Mughal Emperor, Aurangzeb but almost none of us know much about the reality of the terrorizing events that took place under the reign of Aurangzeb. Most of us had just read those things, which we were made to read, in order to hide the facts and some of the real harsh truths from us for the purpose of suiting a particular narrative. While this book will uncover the real facts and the hard-hitting truths of the history and will present the readers with the real face of the Mughal Tyrant – Aurangzeb.

About the Author: Author, Saurabh D. Lohogaonkar is born in Pune, while now he is residing in Mumbai; Saurabh was interested in history of Maratha Empire from a very young age. This curiosity led to early introduction to a vast reading horizon, since then he was drawn to stories, which were related to rich history of Indian civilization. On a professional front, after obtaining Masters in Supply chain and Saurabh started working with some of the top Indian companies for with a career over a dozen years. However, when the reading developed as passion, he ultimately decided to take the next step, to narrate a tale from history.

In ‘Aurangzeb – Whitewashing Tyrant, Distorting Narrative’, some very critical questions are handled with the basic premise, that facts are just facts and do not or rather shouldn’t be changed as per whims and fancies of the interpreter. This book pose a challenge to the narrative, which is getting pedalled today-a whitewashed version of a tyrant and tries to peel off the layers of distortion, mistranslations and haphazard interpretations. The debut book has been written, after over two years of painstaking research and going through thousands of pages. This book will take you to those stormy years, which changed the course of history and helped shape today’s India.

Storyline/Theme: This remarkable title, “Aurangzeb – Whitewashing Tyrant, Distorting Narrative” presents the readers with some of the hard-hitting facts of the “Indian History” that took place under the rule of the Mughal Tyrant – Aurangzeb. Author Saurabh D. Lohogaonkar has written this book primarily as a fact-finding exercise in which he raises a series of serious questions quoting the facts of the events, which took place under the rule of Aurangzeb. Some of these thought-provoking questions are – Is it true that Aurangzeb protected more temples than he demolished? Were Aurangzeb’s acts of temple demolition only of political in nature as trumpeted by a set of historians or due to his strong religious prejudice? Was Hindu support to Dara and Aurangzeb really equal? Was the percentage improvement for Hindu nobles really represent constructive expansion of Mughal Empire or does it signify decline and decay?

Well the list goes on with even more serious questions like – Did Aurangzeb really have ‘no religious litmus test’ for his employment? Who were the ‘prized Hindu nobles’ of Mughal Empire and what actually happened with them during Aurangzeb’s reign? Did Aurangzeb really remitted eighty taxes on population as claimed by historians? What Aurangzeb really was; a ‘Conqueror of Deccan’ or ‘Loser of an empire’? Did East India Company really capture India from Mughals or from indigenous kingdoms? Well, the book not only presents the readers with these serious questions but also gives the factual and detailed account of all these events of the Indian History!

This book will take the readers to those stormy years, which changed the course of history and helped shape today’s India. The facts presented by the Author in this book are backed by a meticulous research with primary and the secondary sources, epigraphical evidence, temple destruction records, forced conversion details, deliberate place name changes. This book will try to critically examine the life of Aurangzeb and the whitewashing initiated by modern interpreters; trying to pass him off as a ‘Justice loving’, ‘Benevolent’, ‘Tolerant’, ‘Secular’ and hence allegedly most misunderstood king of India.

Book Title: The title, “Aurangzeb – Whitewashing Tyrant, Distorting Narrative” is most certainly a great as well as a catchy title and this is something, which makes the book even more interesting, as the title itself compels you as a reader to pick up this book for a read. You would feel the urge to go inside the chapters and try to find out the actual-facts and the events of the real history, which the Author has presented in this book through the extensive research carried out by him. Well, the Author has completely succeeded in choosing a perfect book title for his Daring & Reading Worthy book upon the Indian History.

The book title is also giving the glimpse of the subject matter and the readers indeed finds the answers to all those questions, which the title and the sub-title of this book raises! Therefore, I must mention that it is a very apt title for a book and the Author Saurabh D. Lohogaonkar had been extremely wise to go for this book title along with the mentioned sub-title.

Readers Connect: Well, Author Saurabh D. Lohogaonkar has very boldly answered so many questions, which remained unanswered and yet talked about for a real long period of time about the Mughal Tyrant – Aurangzeb. The book gives a detailed and factual information about those terrorizing incidents that happened in the past but were purposefully hidden from the common people. Therefore, for the readers and especially for the history researchers & scholars, this book is a sort of gem as the book exposes the misleading act of those biased historians, who gave someone all ill minded as Aurangzeb a clean chit.

The best thing about this book is that all the claims made by Author are backed up by reliable and authorized sources, which makes this book a Trustworthy Source of Information!

Verdict: A Book like “Aurangzeb – Whitewashing Tyrant, Distorting Narrative” is for sure a Must-Read oneand deserves a chance. The way author had dared to present the real facts in his book is seriously praise worthy and what makes this book incredible is that it has exposed all the long prevailing myths of the greatness of Aurangzeb. You seriously do not get to read a book like this every day, these kinds of books hits the market only once in a while and Author truly deserves appreciation for his hard work and exceptionally daring thinking!

Moreover, if you are one of those readers, who is looking forward to read “True History” then this book is probably the most-perfect fit for you. Saurabh D. Lohogaonkar is a promising Author, who is very honest with his writings as well as researches, which can be felt in his spectacular book. Readers across the nation will love this book, since the book has been very much successful in presenting the hidden truth to the readers.

Best Self Publishing Companies in India